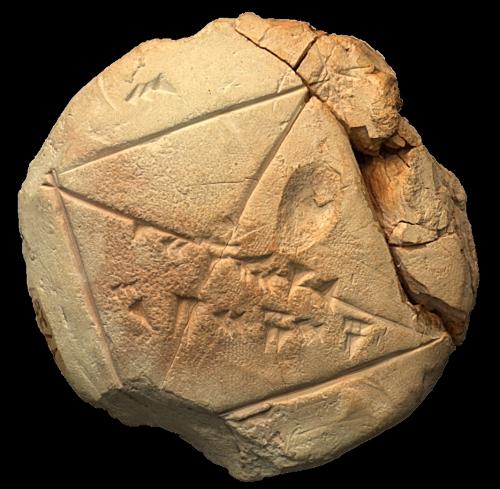 A few weeks ago I was woken up at dawn on a Saturday morning by our newborn son’s whimpering sounds, as he often does in his sleep. Trying not to disturb him, I quietly paced to the study room where I usually take refuge in to meditate or read until his sounds turn into a ravenous shriek for a morning hug. I glanced over the books that my wife and I have accumulated over the years, which are displayed victoriously in a wall to wall bookshelf. Having absolutely no desire to read anything and annoyed at the fact that I did not even remember reading most of these books – even though they are all signed and dated- I noticed the book which I had purchased back in 2004 (the receipt was still between the pages, turned yellow over time): “A History of Pi” by Petr Beckmann (Link). I remember skimming through it back when I first purchased it.

Then, as expected, the monkey mind started working and reminded me of a recent memory from last year during a fall semester final exam, during which this senior engineering student asked me whether he could use 3.0 as the value of Pi in his calculations or not. I stared at him in disbelief and I remember rebuffing him by saying “three thousand years ago in Mesopotamia, people made their calculations in sand and even then they used 3.14. You have a scientific calculator at your disposal. What could be your excuse? Absolutely not!”  (Yes, I could have been less sarcastic).

I decided to verify whether my claim was valid or not and started to actually read the book after so many years. At times it is really hard to follow the book nevertheless it is a fascinating book so far (I am not yet finished). Not least the section where the author was conjecturing how the ancient people could have derived the area of the circle caught my attention. The area of a circle, A, as we all know by heart, is

where  is the radius of the circle. Proving this formula is rather easy with our knowledge of integral calculus. For example, as shown in the figure below using an infinitesimally small slice of an isosceles triangle with base  dL and sides, r, and the fact that for very small angles , we can calculate the area of a circle as:

However, back then, the author hypothesized, they must have used the idea of rearrangement, as shown below.

Imagine that we divide the circle into four quadrants as shown on the left and arrange them side by side, and fill in the spaces between each slide by four equally large quadrants, as shown on the right of the figure. What comes out of this rearrangement is a vague reminiscent of a parallelogram. Its length, measured along the circular arcs, is equal to the circumference of the original circle, 2πr.

Instead of four, if the circle was divided by many equal sized slices, it resembles a parallelogram more closely, as shown in the figure below. As the number of these slices approach infinity, then it becomes indistinguishable from a rectangle with sides 2πr and r. The area of the original circle can be deduced by calculating the area of the rectangle as  and dividing by two (since we filled up the gaps with the slices of the same size), which yield the formula for the area of the circle we all know.

According to the author, this derivation was also used by Leonardo da Vinci back in 16th century. The similar rearrangement method is also documented in a 17th century Japanese document, shown below.

Aside from the simplicity of the derivation, what stroke me was that figure drawn in that Japanese document. With the slices drawn in black and white and stretched out, it resembles a backgammon board. Now, it is known that backgammon is one of the oldest games in existence. A quick Internet search reveals that no one quite knows exactly who invented it and where. Yet, it is believed to be about 5,000 years old and it was probably originated in Mesopotamia.

Of course, I have no credible sources to back up the following hypothesis. I can only guess/dream up how it was originated. However, it could have very well been the case that this figure was being taught in schools, or that it was on the clay tablets of academic scholars, showing the rearrangement method for deriving the area of a circle. The origins of even the most intricate games are quite simple, and it evolves and become more and more complicated. Who knows, perhaps, a bunch of bored scholars could have fabricated the initial backgammon by using, then already known, dice made of human bones. It could be that a tablet that included this figure broke into pieces, and someone, out of sheer boredom, challenged his/her friends to see who can rearrange the figure by simply rolling the dice and using the same number of broken pieces to put the figure back into its original shape. We will never know. Yet it is interesting that – yes I did try this- if we calculate the area of a checker and multiply by 30 (there are a total of 30 checkers on a board), it roughly equals to one quadrant of a backgammon board.

Oh well, what do I know? Perhaps it is just a simple coincidence.